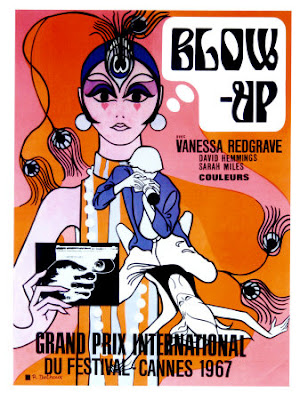 Photographer David Hemmings takes some pictures of a couple in a park. While developing the film he realizes he might have been witness to a murder. Also starring Vanessa Redgrave and in a small part Jane Birkin, directed by Michelangelo Antonioni.

Another slow art film, but actually, it's pretty good. It's an enigmatic thriller, where even the question of whether a crime has been committed or not isn't entirely certain. It doesn't explain anything of what is happening, something you will either find frustrating or appealing. Personally, I like that. It also captures a time and a place: Swinging London in the sixties.

I've seen this film several times. I've always loved the ending with the imaginary tennis ball. It's one of my favourite movie endings. But watching it now, it's the first time I noticed this: After Hemmings throws "the ball" back, the camera stays on him, we don't see the mime tennis players anymore, but now we hear the sound of an actual tennis ball being hit. What is the significance? An indication that the whole thing took place in his head? Hmm...