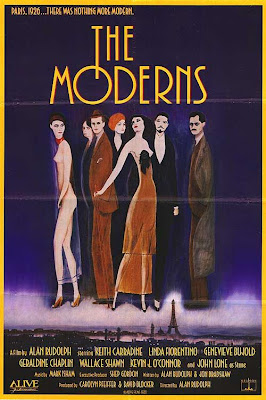 Keith Carradine is a struggling artist in Paris in the 20s, agreeing to forge some paintings. Also starring Linda Fiorentino and Wallace Shawn, directed by Alan Rudolph.

Still haven't seen Midnight in Paris. There is no rush. I'll wait until I find it used or at half price. I re-watched this film, also taking place in that period, and with Hemingway and Gertrude Stein as supporting characters. I seem to remember liking it when I saw it in the cinema in the late 80s, but there's something annoyingly smug and clever about the film. It's slow and arty and ends up even more boring. It also feels a bit claustrophobic since it keeps reusing the same four or five sets. The characters are not someone you care about. And does it have to be so serious to be art? Put in a couple of jokes for chrissake!
Posted by Jason at 12:50 PM