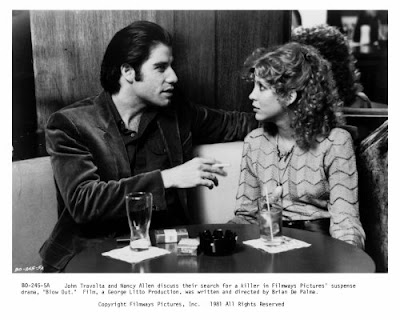 A conspiracy thriller where sound recordist John Travolta might have evidence that a presidential candidate has been assassinated. Also starring Dennis Franz at his sleaziest and Nancy Allen at her most vulnerable, directed by Brian De Palma.

Ah, De Palma... His two latest films, Black Dahlia and Redacted were pretty awful. I thought he was such an established director that he could afford a couple of flops, but there hasn't been any new film from him in several years. Give us one more masterpiece before you kick the bucket, okay? Blow Out is an homage to Antonioni's film, taking up themes that concern De Palma as well: reality, illusion and the lies underneath. There are several bravura sequences, one of them being Travolta finding out his tapes have been tampered with. There's also a pretty big plot hole. At some point Travolta just needs to take a phone call to find out something. He doesn't. It would have ruined the ending of the film, of course: A resigned sadness, that I'm not sure you can get away with in modern Hollywood films anymore.
Posted by Jason at 12:40 AM