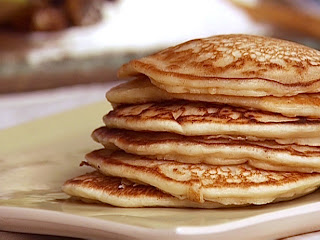 Breakfast can be tricky in a new country. Back in Norway I used to have sandwiches with slices of banana, blueberry jam and a dash of potato salad. When I moved to France I stopped eating that since I never found the right type of potato salad. I rather switched to cereal. In Montreal I found one that was pretty close to the one I'm used to, it's called Morning Crisp or Croque Matin. But really, if I'm in another country, shouldn't I use that opportunity to try something else?

So I bought bagels. But there's no toaster in the apartment, I will have to buy one. In the meantime I'm eating buttermilk pancakes with syrup. It only takes a minute to heat them in the microwave. Very good, and quite different from the flat French pancakes - crêpes. Oh, love that Hellboy strip, by the way.
Posted by Jason at 11:14 PM