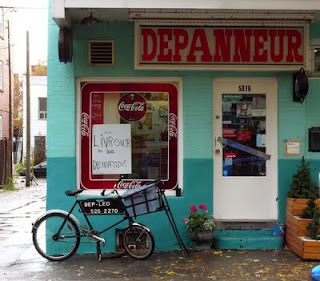 That's what a cornershop is called around here. So that's already one thing that is different from France. I'm woken up around dawn by the chirping of birds. I've asked them to turn it down a notch, but noo. Outside my window there's a tree, sometimes with a squirrel in it. There was a cat watching the squirrel yesterday. It's a zen thing, looking at squirrels - I can do it for hours. Maybe not for the cat.

In crime films you often have people stuffing other people's heads into toilets, to get money or some sort of information - like a variation on breaking a leg or a finger, I suppose. In France that's not possible - the toilet bowl is too small. I've noticed here that it's big enough to do that. Not that I intend to. But it's good to know.
Posted by Jason at 9:50 AM