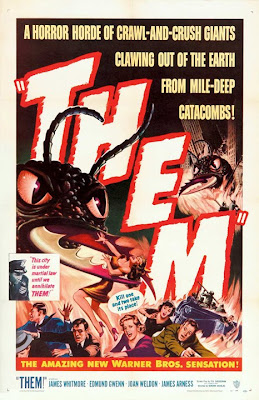 Enough 70s films with longhaired hippie scum! Give me a 50s film when men were men and there was always a big bug around to fight! One starring James Arness - Norwegian Viking, Matt Dillon and Zeb Macahan. Ah, I miss How The West Was Won, that was a great series... Anyway, Them - is it the best big bug film? Probably. There seems to be a pattern in these films. There's a professor who explains what's going on (atomic tests, mutations), with or without a pipe, and he has a fetching daughter that the hero falls in love with. But the film actually looks great, and kudos to the actors who manage to say their lines without cracking up.
Posted by Jason at 2:01 AM