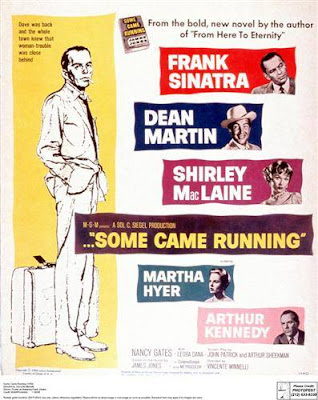 Sinatra is a WW2 vet and writer who returns to his hometown and has to deal with smalltown hipocricy. Also starring Dean Martin and Shirley MacLaine, directed by Vincente Minnelli.

Gotta love the 50s films! The whole look of Hollywood films at the time: the cinemascope, the colours, the melodrama! This is the first Minnelli film I've seen. I should try to find more of his films. The same with Douglas Sirk; I think I've only seen Imitation of Life. Anyway, Sinatra is very good in this film. He had a certain worldweariness that fits the character. The exteriors seem to be mostly shot on location, so it gives a more real feeling than if it had been done on the backlot. The images are carefully composed, in long takes - there are none of the over the shoulder shots you see in modern films - with few closeups. So it looks great, but the images also feel a bit too small on my tv screen; it's a movie that probably should be seen in a cinema.
Posted by Jason at 1:23 AM