Love Is A Many-Splendored Thing 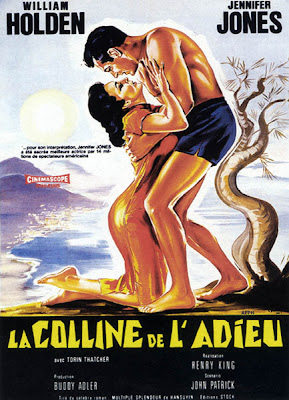 I found this dvd for only 3 euros. It's not Minnelli or Sirk, but it got that 50s melodrama thing going on. It's also got the completely artificial dialogues that belong to those movies. I found it a bit hard to care about the story. Holden and Jones didn't get along at all during filming, that might be part of it. But they just don't seem like real people. Showing some real pain, like Humphrey Bogart drunk at night, after he meets Ingrid Bergman in Casablanca, would have been nice. Hell, even a scene of a character brushing his teeth. Instead you notice things like how often you see the characters in profile, looking at each other and the lack of close ups. I've wondered about that in movies from this period. Apparently it's because the cinemascope anamorphic lense didn't allow for close ups. Which makes it sometimes hard to read the feelings of the characters. To get back to Casablanca - if it had been made in the 50s, there wouldn't have been any close ups of Ingrid Bergman's face, and what a loss that would have been. The film also made me realize that Titanic, the James Cameron film, is pretty much a 50s melodrama combined with a 70s disaster movie.
Posted by Jason at 2:31 AM