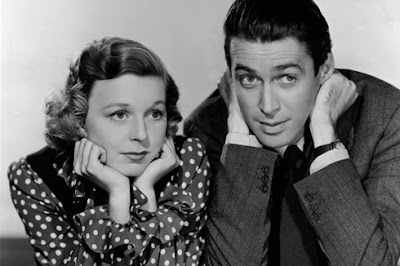 Some more James Stewart films. First: The Shop Around The Corner. Stewart and Margaret Sullavan work in the same shop, in Budapest, and have trouble getting along. Directed by Ernst Lubitsch.

It's a classic that still holds up well - it's old Hollywood at it's best, and an example of the famous Lubitch touch. The film is more appealing than actually funny, especially in the sympathetic tone it has towards all of it's characters, none of them simply clichés, including the owner of the shop, Mr Matuschek, played by Frank Morgan. There's actually a certain darkness in the film, a suicide attempt that goes wrong. Happiness wins out in the end, though, but it feels well earned, and not simply tacked on.
Posted by Jason at 12:49 AM