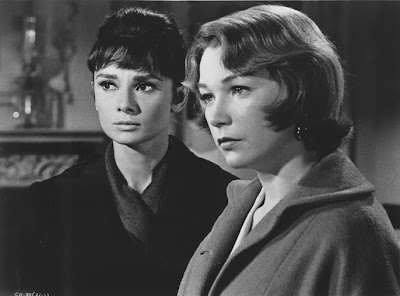 Got some more Audrey Hepburn films! First: The Children's Hour. Hepburn and Shirley MacLaine are the headmistresses of a school for girls. One pupil accuses them of being lovers. Also starring James Garner, based on Lillian Hellman's play, directed by William Wyler.

It's a dated, but still quite powerful film. Released the year before Days of Wine And Roses, it's one of the first issue films, showing that the medium could be something more than just escapism. Both the main actresses are excellent. The director could maybe have asked the main child actor to dial it down a bit. Veronica Cartwright as one of the other kids is more convincing, pretty much doing the same job here that she later did in Alien.

As it turns out, there is a bit of truth in the girl's accusation, setting up the tragic ending of the film. It's an ending that can be debated, I suppose. From a dramatic point of view it's effective, less so if it is viewed as the moral of the story. If made today, there probably would have been some uplifting You go, girl! ending, but I'm not sure if it would make a better film. As it is, it shows the changes in society the last fifty years. And maybe I'm just a sucker for sad endings.
Posted by Jason at 12:53 AM