It Happened One Night 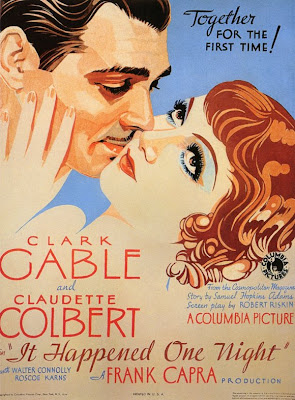 Claudette Colbert is a spoiled brat running away from her father who wants to annul her marriage. Going back to her husband and to avoid detectives sent to catch her she takes the bus, ending up on the seat next to reporter Clarc Gable. Directed by Frank Capra.

Since I didn't care too much for You Can't Take It With You I wanted to re-watch Capra's earlier Oscar winner It Happened One Night, from 1934. Being a simple love story the film feels less dated than other Capra films. The scene on the bus with everybody singing and Colbert and Gable then giving their money to a poor boy and his mother who fainted is probably the most capraesque sequence in the film. I assume Colbert was a big star at the time, but I think this is the only film of hers I've seen. Gable is very funny as the journalist. Of course, in the beginning they can't stand each other, only gradually warming up, and at the same time creating the mold for pretty much every romantic comedy ever made. The scene where they pretend to be married in front of the detectives is probably my favourite. The hitch-hiking scene is also very funny. A classic.
Posted by Jason at 12:45 AM