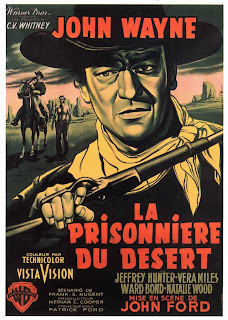 After reading the book about this film, I re-watched it. John Wayne and Jeffrey Hunter spend years trying to find Natalie Wood that has been kidnapped by Commanches, directed by John Ford.

The film has scenes that today might seem corny, the Indian chief is played by a white man, and there are lots of outdoor scenes that clearly are filmed in a studio, but the film still feels more real and lived in than most modern Westerns. There are lots of little details that ring true, like the fact that the character Lars Jorgensen, who speaks with a Scandinavian accent, is the one who uses American expressions like By golly, or By jiminy. At the same time, Ford came from silent films, and a lot of the story is told visually, with room for ambiguity.

Indians in Westerns is a tricky thing. Will they be faceless hordes to be shot down or noble, wise treehuggers? Is it a racist film? Well, John Wayne's character is clearly a racist. But it was a racist period. Indians raped and tortured. The whites weren't any better, attacking Indian camps and killing women and children. There's a real darkness in the film, closer to McCarthy's Blood Meridian than to the ordinary 50s Western, balanced with some of Ford's usual comedic elements.

Visually the film is amazing, the Monument Valley backgrounds giving it almost a biblical feel. And then there's the famous ending, with Wayne framed by the doorway, a scene just as iconic and mythic as Bogart and Bergman at the end of Casablanca.
Posted by Jason at 1:01 AM