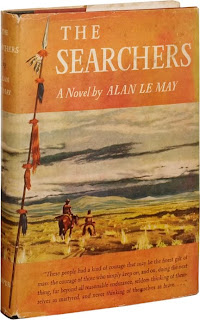 The Art of Denis McLoughlin by David Ashford
Amazing book, with lots of bookcovers by McLoughlin. Mostly crime novels, but also some Westerns. Even some of his comics.

Kissing The Beehive by Jonathan Carroll
Carroll's attempt at the mainstream? It's disappointingly uncarrollian - a tug of war between a writer and a -yawn- serial killer, with no fantastical elements.

White Apples by Jonathan Carroll
Glass Soup by Jonathan Carroll
Glass Soup is a continuation of White Apples. Carroll's best books are a mix of the every day and the imaginative. These books takes place almost exclusivly in the latter. I enjoyed the books more than Kissing The Beehive, but there is a lot of exposition - rules about going back and forth between life and death.

Secrecy by Rupert Thomson
A tale from 1690's Florence, it's beautifully written, as always with Thomson, but somehow I was less engaged in this book.

The Searchers - The Making of an American Legend by Glenn Frankel
Very interesting book, not only about the film, but also the novel it was based on and the real case, the kidnapping of Cynthia Ann Parker by Commanches and the son she had, Quanah Parker. It's a pretty bloody story, with scalping and torture on both sides. Nobody comes away innocent, except maybe Cynthia Ann herself.

Hergé - Son of Tintin by Benoît Peeters
Good, solid biography of Hergé. There are some mix-ups in the translation, though. A page is often called a panel and a panel is called a frame.

Gone Girl by Gillian Flynn
I gave up on page 59. Does it get better? I found both the voices of the husband and wife kind of annoying.

Currently reading:
The Lonely Hunter - A Biography of Carson McCullers by Virginia Spencer Carr
Posted by Jason at 1:42 AM