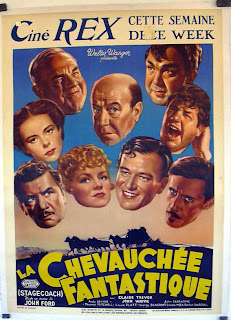 Apaches attack a stagecoach. Luckily, John Wayne is there to shoot most of them. Directed by John Ford.

This is one of those Westerns where the Indians are just a faceless horde to be shot down, with no background for why they attack. At one moment a passenger on the stagecoach, with one bullett left in his gun, directs it at the head of a female passenger, the idea being that death is better for her than to be captured by Indians. Only at the end of his career, with Cheyenne Autumn, did Ford try to see the situation from the Indians' point of view.

Anyway... this was the breakthrough film for John Wayne, but his persona isn't quite there yet, so it's rather Thomas Mitchell, as a drunk doctor, that steals the film. It's a sound film, but still often has the feel of a silent. John Carradine plays a Doc Holiday type character. There's the scene of the bartender removing the mirror before a duel - always a classic.
Posted by Jason at 12:33 AM