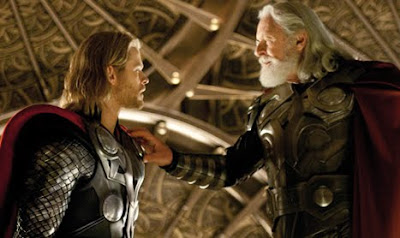 Thor is the God of Thunder, son of yadda yadda yadda, directed by Kenneth Branagh.

Sigh... I was hoping to enjoy this film. I thought Iron Man and Dark Knight were pretty good, entertaining films. Maybe I'm getting too old for this shit? The film loses me with that boring fight between Thor and those ice creatures or whatever, and it doesn't get much better. Shouldn't a film like this be a bit fun? The script is weak, the editing is awkward. Who are these people, and why should I care? There are fights, but you don't really know what's at stake. The film apparently did quite well financially, but it has all the signs of a flop: There is nothing really funny or exciting, and you just sit there passively watching, never feeling any connection to what is happening. It has one good scene: the one where Thor has learned his lesson of humility and he finally gets his hammer back. One moment there it felt like a real movie.
Posted by Jason at 12:14 AM