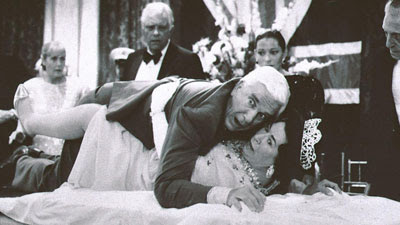 I have caught a cold, so instead of getting snot all over my artwork I'm drinking hot chocolate and watching a Leslie Nielsen double feature. Naked Gun also stars George Kennedy, O.J. Simpson and in smaller roles Tony Soprano's mom and Elaine Benes' dad. It's hard to choose favourite scenes. Maybe the one with the pen and the fish.... Or the one with Queen Elisabeth... For a European viewer the energy drops maybe a bit during the baseball game. It's difficult to get all the references. Airplane! also stars Julie Hagerty, Robert Hays and Lloyd Bridges. It's still funny. Maybe the scenes with Johnny a bit less.

Top Secret is probably my favourite, though. Maybe because it is the less known one. Kentucky Fried Movie is uneven, but the Martial Arts sequence is very good. The Zucker Abrahams Zucker films peaked at Naked Gun, I think. They were now established and less hungry. The ones they made after that it became just another film. For Nielsen also it only went downhill from there. In the parody films he made later the comedy was too broad and it was often just a collection of gags and no story.
Posted by Jason at 4:56 AM