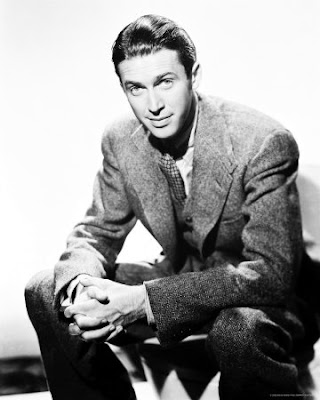 I've been watching season 8 of 24 on dvd lately, so there has been less time for movies. It was another disappointing season after the equally disappointing seasons 6 and 7. And it seriously started to repeat itself. A mole at CTU, really?! The show has always been a mix of the exciting and the silly, there's been both the death of Chappelle and Bauer's wife getting amnesia, but at it's best you were up at three in the morning, watching just one more episode.

Writing about the Cary Grant films made me want to rewatch Philadelphia Story and also some other James Stewart films like Harvey. But first some westerns he made with Anthony Mann. It's still a bit difficult for me to believe in Stewart as a cowboy. The skinny guy from the Capra films in a cowboy hat?! But I guess he came back from being in World War 2 a changed man. First up is The Far Country, where Stewart and Walter Brennan go mining for gold in Klondike. Jack Elam is third bad guy to the left. Where's Lee Van Cleef? I guess he was busy shooting another western that week.

It's not a bad film. I could write a paragraph about it's theme of the individual versus the community, but I mostly watch these films to see cowboys fighting indians or cowboys strumming a guitar and serenading their horse.
Posted by Jason at 8:38 AM