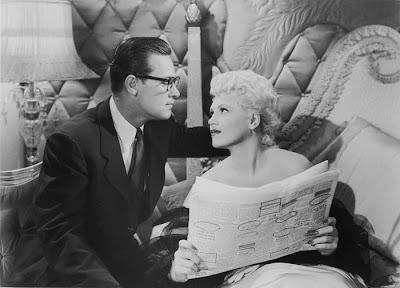 Got some dvds that don't really have that much in common except that I haven't watched them yet. First up is Born Yesterday. William Holden is a journalist hired by loud and vulgar tycoon Broderick Crawford to tutor his dumb girlfriend Judy Holliday so she can be presentable in Washington DC society. Directed by George Cukor.

I don't really understand why this film is considered a classic. It's not funny. Holden is looking a bit Rip Kirbyish here with glasses. Holliday does the squeaky voice that seemed to be expected at the time to portray dumb. It gets annoying pretty soon. Maybe it worked on stage where Holliday also played the part, but less so in a film if the goal is to create something more than a cliché. Of course it turns out that she is not that dumb, but it's still a mystery why Holden would fall for her.
Posted by Jason at 1:47 AM