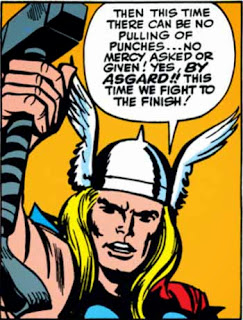 I rewatched the first Thor film and liked it better now the second time. It still has weaknesses, but I was more engaged in the story. It could have used a bit more time on the smaller scenes instead of constantly rushing on to the next fight scene or whatever, but I guess that's the way films are today. Then I watched Thor 2, and it was pretty great, actually.

It was dubbed into French, so I didn't understand everything, but ah, who cares, visually the film is HUGE. The way Asgard was portrayed was much better this time, less shiny - now it's actually a real place that people inhabit. I read some reviews that said the film dragged a bit in the middle, but I was never bored, really. There's lots of eyecandy to look at. The design people did a good job on creating a sort of... norsepunk? The director never does anything too fancy with the camera, he just tells the story. And there are even some good jokes!
Posted by Jason at 10:56 AM