The Skyfall and the Whale 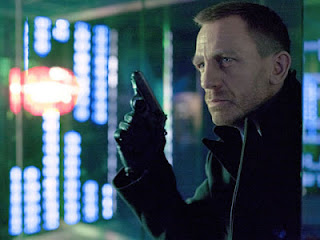 Skyfall:
See, it's possible to make an action film without the constant shakycam. And I like that the filmmakers take their time telling the story, not just rushing from setpiece to setpiece. Unfortunately, they're not able to top the pre credit sequence, and then the film drags quite a bit at the end, even getting slightly pretentious (well, it is a Sam Mendes film, after all). It's not as good as Casino Royale, but better than Quantum of Solace. Even while enjoying the classic style of this film, it would have been fun to see a punkrock James Bond film, in black and white, why not, and clocking in at under 90 minutes. That's sort of what QoS should have been.

The Squid and the Whale:
Loved this film. Since it's about divorce I was afraid there would be a lot of yelling and crying, all captured by a constantly moving handheld camera, like Danish dogme movie Festen or Woody Allen's Husbands and Wives.  But no, there is handheld camera, but mostly pretty subtle; it's just observing what's happening, with no fancy tricks. It has the feel of a French film - there is some nouvelle vague namedropping - and avoids any sentimentality. Did the mother remember watching the Robin Hood film with her son? We don't know.
Posted by Jason at 1:14 AM