Death Rides A Horse Up In The Air 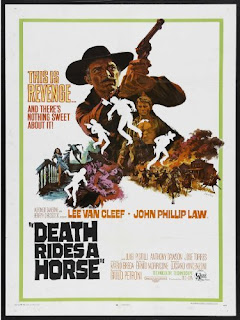 It's not a bad film. The director is no Sergio Leone, but who is? And it's got one of Ennio Morriccone's  catchiest scores. I got one problem with the Spaghetti Westerns, it's the men working for the bad guy, who are there basically to laugh evilly when the boss says something or when the good guy is being tortured or something. Did those people really exist? I'm not sure if I've ever met anyone who laughs evilly.

Up In The Air, starring George Clooney, directed by Jason Reitman.

The film has all the signs of being a quality film, the type of film that wins all kinds of awards, so why do I watch it without feeling any connection to the story? For one thing, I don't believe in George Clooney's character, which makes it hard to believe in the film. He's more of a construction than a real person. His job is to fly across America to fire people, okay, but he also has a lecture tour where the message is, think only of yourself, and he has an apartment that looks exactly like a hotel room. Hmm, I wonder if he will learn a lesson during the film? There's a scene where Clooney has to talk his future brother in law, who on the wedding day suddenly gets cold feet, into marrying his sister. It's such a silly cliché scene in a film that tries to be more serious, and the only reason it's there is because Clooney then has to question his own lifestyle. And there's of course a moment towards the end during his lecture tour where he suddenly stops his old speech, realizing he doesn't belive in it anymore. There's not a single surprise in the film, everything is set up for a later pay off. I guessed the final image of the film because it's given in a piece of dialogue earlier. (I also guessed Clooney would himself be fired at the end, something that didn't happen, so I actually don't know everything.) The film is too perfectly put together, like a mathematic formula, and life is not really like that; it's messy. Compare it to one of those rambling 70s films, like Five Easy Pieces – also about a man who questions himself - and where the characters seem like real people and you're never quite sure where the story will go. 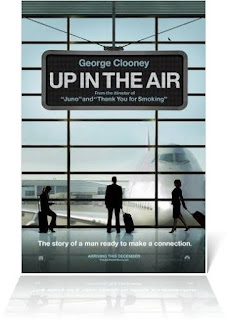