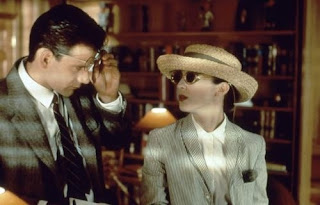 Campbell Scott has invented some sort of process that is worth a lot of money, and a lot of people want to get it. Also starring Steve Martin and Ben Gazzara, written and directed by David Mamet.

Who can you trust? No one. I think it's a better film than Heist. For a long part you're not quite sure where the story is going. Then unfortunately it stumbles at the end. One twist too many. I think a darker, less happy ending would have been more satisfying - at least for us pessimists. I put a thief in my mouth to steal my brains.