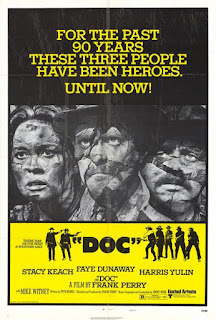 The 70s version of the Shootout at the O.K. Corral, starring Stacy Keach as the doomed Doc Holliday, Harris Yulin as Wyatt Earp and Faye Dunaway as Kate Elder, directed by Frank Perry.

It's a great little Western, and probably the darkest version of this particular story. It has the slowness of the 70s films, it's not all about the plot - there's the little details that make Doc and Kate seem like real people. Everybody is dirty and unshaved, the actors mumble their lines (so it's a bit unfortunate that there is no subtitles option.) Dunaway must be the ultimate 70s actress - next to Karen Black, I guess - and she does a good job here. Keach and Yulin are both terrific, neither heroes or villains. And the actual shootout is not dragged out,15 seconds and it's over.

Should I give Tombstone a second chance? I didn't like it the first time I saw it. Maybe the director's cut... I also see there's a movie called Hour of The Gun, a sort of sequel to Gunfight at The O.K. Corral, by John Sturges, but with other actors and made ten years later.
Posted by Jason at 1:18 AM