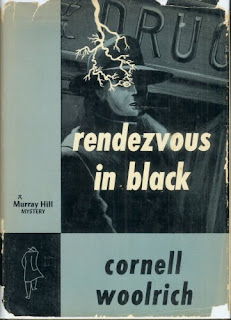 I remember watching this French tv series as a kid about a man avenging the death of his girlfriend. Some hunters in a small plane throw a bottle out the window. It hits a woman on the head and she dies. Her boyfriend finds out what happened and one by one kills the people on the plane. He has a notebook with their names written down. After each death he puts a cross by the name and says, -Puni. Punished. That's about all I remember, but that series made a big impression on me. It was a major inspiration for my story Emily Says Hello.

It was exciting to discover that this story is based upon a novel by Cornell Woolrich. Some googling made me learn that the tv series, Rendez-vous en Noir,  was made in 77, with Daniel Auteuil as one of the actors. And the boyfriend doesn't kill the killers, he kills their wives or girlfriends. I remembered that wrong. Anyway, the book is ordered and I look forward to reading it. I might set myself up for a disappointment. Will the book make the same impression on me as an adult as the tv series did on me as a kid? 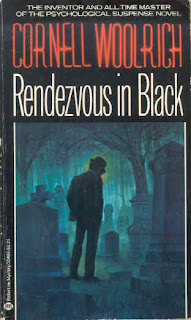