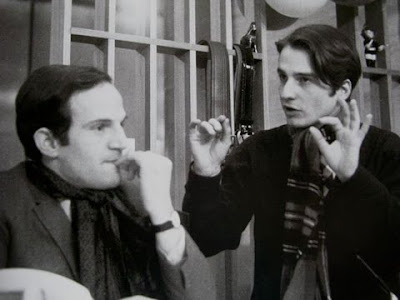 Jean-Pierre Léaud is discharged from the army. He goes back to his old girlfriend and gets a job as a private detective. Directed by François Truffaut.

It's very much a French film. As a detective, Léaud doesn't try to find a missing person or stolen jewelry, the client rather wants to know why nobody likes him. There's a constant distance to the characters - we never find out why they behave the way they do. The ending itself is quite enigmatic, with lots of questions left unanswered. There are also some very funny and charming scenes. The scene at the breakfast table, where Léaud and his girlfriend write notes to each other is a real movie moment. The film opens and ends with a catchy song by Charles Trenet and made me want to rush out to the nearest record store and get one of his cds.
Posted by Jason at 3:07 AM