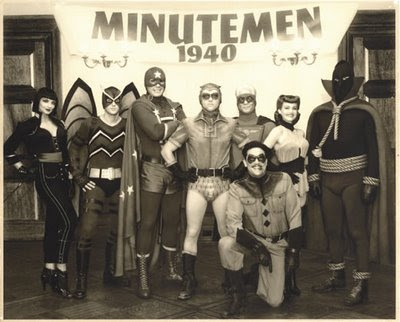 I found a used dvd of this film so I finally got to see it. It's interesting how Snyder gets the details right, but completely misses the spirit of the comic. The film is far too stylish, looking like one long rock video, and there is never a minute where you actually believe in the characters or see them as real people. It takes place in an alternative 80s, but should have had more of a 70s feel, like a Taxi Driver with super heroes, and with as little CGI as possible. I'm not a big fan of Greengrass's shakycam, but I think he would have been a much better director for this. Snyder treats the comic as if it was The Bible, being too faithful in the adaptation. The flamethrower at the end of the sexscene was already silly in the comic. The title sequence is the one place he shows some imagination, it's probably the best part of the film. Too bad it's the opening and that it only goes downhill from there. I don't mean to say that the comic was a masterpiece. At the time it was released I think I was mostly impressed with it's structure, the way it went back and forth in time. If anything, the film only accentuates how kind of ridiculous it was.
Posted by Jason at 2:45 AM