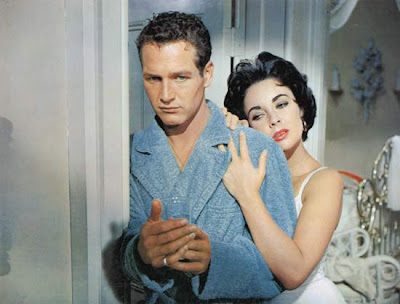 Got some new Paul Newman films, and I will also rewatch some other ones. Starting with Cat on a Hot Tin Roof, based on the Tennessee Williams play, also starring Elisabeth Taylor and Burl Ives, directed by Richard Brooks.

Paul Newman doesn't want to fuck Elisabeth Taylor. Already there the film is a bit hard to believe. This is even before the rest of the cast turns up and start calling each other things like Big Daddy and Sister Woman. Okay, he's Paul Newman and can get whoever he wants, but still... Taylor walks around in her underwear and Newman rather wants to get drunk? Oh yeah, that's right, he's got some daddy issues and also believes Taylor fooled around with Skipper, a football buddy. At the same time his brother, Gooper, tries to steal his inheritance. (Am I remembering these names correctly?) There's a lot of yelling and shouting, of course, and there's a nice bit with Newman's crutch as a symbol, but this seems to be a minor Tennessee Williams play.
Posted by Jason at 3:30 AM