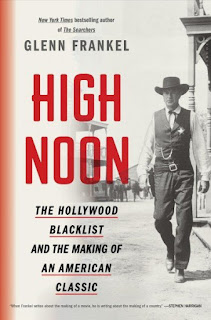 Homeward Bound: The Life of Paul Simon by Peter Ames Carlin
Interesting biography, not hiding that Simon could be difficult. Did he steal the idea for Graceland from another artist? Sure seems like it. But... the guy knew how to write a catchy tune.

A Gambler's Anatomy by Jonathan Lethem
Not top shelf Lethem, but still... it's Lethem. Didn't get too hooked on the story though.

High Noon: The Hollywood Blacklist and the Making of an American Classic by Glenn Frankel
Very interesting book, and in today's world the Blacklist story hasn't lost much relevance.

4321 by Paul Auster
At almost 900 pages, I wish this was Auster's masterpiece. It's not. (That's Moon Palace in my opinion.) One life, four possibilities - it's a bit hard to remember what's already happened where. There are the usual suspects from Auster: baseball, Laurel & Hardy, Paris, but Ferguson, the main character, unfortunately never comes off as particularly interesting.

The Largesse of The Sea Maiden by Denis Johnson
Not quite Jesus' Son. Definitely taking place in the Denis Johnson universe, but there's maybe a reason these stories weren't collected until after his death.

Jonas Fink: Le libraire de Prague by Vittorio Giardino
A continuation of the Jonas Fink story, this book takes place during the Prague Spring, culminating in the Russian invasion. The drawings hold the usual high Giardino standard, the dialogues are sometimes maybe a bit too on the nose.

Book given up:
Hemingway at Eighteen: The Pivotal Year That Launched an American Legend by Steve Paul
It seems like the writer studied the Kansas City Star at the time Hemingway worked there, guessing what stories made an impression on him, and also what articles he "probably" wrote.
Posted by Jason at 12:47 AM