In defense of Thor: The Dark World 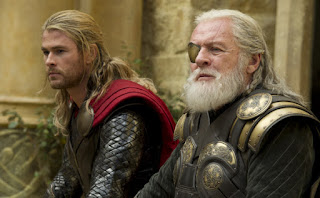 Okay, so Thor 3 is on the way. When lists are made of the best Marvel films, Thor 2 often ends up near the end, barely above Hulk. I don't understand why. In my opinion, next to Cap Am 2, it's the best one. Why? Let me count the ways.

1. I like the classic way it's directed. The camera actually stands still once in a while.
2. It has the best and funniest Stan Lee cameo.
3. I like the whole subplot of Kat Jennings and her intern. They're actually likable.
4. The scene where Loki learns that his mother is dead is actually touching.
5. There are some good jokes in the film, like the scene where Thor hangs up his hammer.
6. The insane, big fight scene at the end, going on in the different spheres, is actually fun, visually inventive and not unnecessarily dragged out.
7. It shows Asgard as a place where people actually live, it's not just a shiny backdrop.
8. I like that the villain is an introvert. I can relate!
Posted by Jason at 7:18 AM