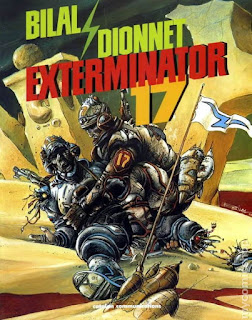 Door Wide Open by Jack Kerouac and Joyce Johnson
The letters between them before and after On The Road was published. Kerouac is either travelling all over the place, sometimes checking in at Johnson's apartment in NYC, or staying with his mother in the house he bought for her, and then finally being an alcoholic, redfaced stranger.

Exterminator 17 by Enki Bilal and Jean-Pierre Dionnet
I have no interest in what Bilal has done the last 20 years, but I enjoyed re-reading this book. The first thing I ever read by Bilal was a chapter of this book, but in black and white, in Heavy Metal. I discovered Moebius in the same issue. Mind blown, twice! Real classic sci fi, this, with robots / androids and spaceships, ending in a great final image.

Boyhood Island by Karl Ove Knausgaard
It seems all childhoods in Norway in the 70s were the same. Football, comics (Johnny Puma!) candy (Fox and Nox!), collecting empty bottles, DBS bikes, scary older kids, Blind Passasjer, Pop Spesial, reading books from the library (Desmond Bagley, Ken Follett!), dreaming about girls in class, swimming in the public pool. Hmm, nothing about listening to the radioplays on Saturdays.

Amnesia Moon by Jonathan Lethem
Lethem has written some very good books. I don't think this is one of them. Starts out a bit Mad Max, but then... goes a bit all over the place, even though there are some good ideas here and there.

Lucky Alan & Other Stories by Jonathan Lethem
It's a couple of weeks since I finished this book. I don't think I remember a single thing. Some guy sitting in a hole?

All Fires the Fire & Other Stories by Julio Cortazar
My first Cortazar, but not the last. Intriguing stories, often ending in, But... what does it mean? Like the title story. Heck if I know! The book is sort of Twilight Zone meets Bunuel, maybe, but then with the twist ending in sight, it rather goes left, finding something more interesting there to look at.
Posted by Jason at 8:27 AM