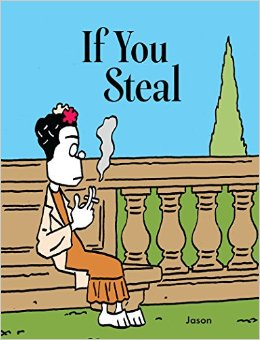 This anthology of off-kilter, anthropomorphic short comics by Jason feature Frida Kahlo as a contract killer, and much more.
Jason’s latest collection of full color comics indulges in his light and playful side, consisting of eleven wildly off-kilter stories that mix incongruous elements of pop culture and a variety of genres, pastiches and mash-ups in a delightful soupcon of graphic storytelling. Frida Kahlo is a hired killer. Santo, the Mexican wrestling film star, faces his ultimate challenge. The rise and fall of Chet Baker—told in six pages. Night of the Vampire Hunter. The last word on the JFK assassination conspiracies. A non-linear heist story that also somehow includes images by Magritte. A big bug story based on 1950s black-and-white films. And what would Van Morrison’s Moondance album look like if it was a horror comic? All as foretold by Nostradamus, of course. And all told by Jason, whose sly and elusive meanings are hidden beneath a beguilingly deadpan style. Full-color illustrations throughout