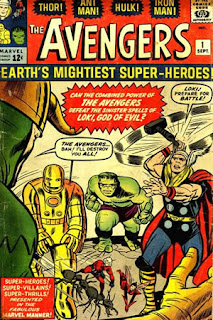 ...I watched The Avengers and will report that I was bored out of my skull. I found it in English and in 2D, but after only 5 minutes I realized I had done a mistake in buying a ticket. Maybe it's because I'm an... adult, a 46 years old man? I just felt no connection at all to the story and the characters. Granted, there are some very funny scenes, showing there is room for humour in a superhero film, but the story was just some slapped together old sci fi tropes about oh, some portal to another world, an invasion from outer space and zzzzzzzzzzzzzzzzzz. Who's in danger? A lot of people, apparently. Millions! Yawn... The Spider-Man films got repetitive with poor Mary Jane being rescued all the time, but at least there you cared a bit for a minute or so what would happen. No, I'm afraid the train is gone. The smoke puffs are getting smaller. The sound of the engine is getting weaker. Etc. I have seen my last super hero movie.

Okay, I might do a last exception for Batman, but that's it.
Posted by Jason at 3:39 AM