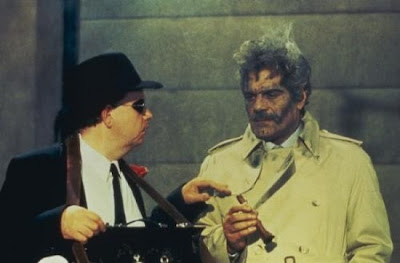 What phoney dog poo? Before Val Kilmer was Elvis in True Romance and Jim Morrison in The Doors he played rocker Nick Rivers in the much better film Top Secret! Also starring Lucy Gutteridge and Omar Sharif. Written and directed by Jim Abrahams and Jerry and David Zucker.

I saw Airplane! and Naked Gun some time ago, but I felt an emptiness in my life, something was missing, and I finally figured out what it was... Top Secret! I've tried everything: the embassy, the German government, the consulate. I even talked to the U.N. ambassador. It's no use, I just can't bring my wife to orgasm. The film is clearly influenced by the old parodies in Mad Magazine, with some jokes in the foreground, others in the background. Not every gag works, but at least two out of three. Favourites are hard to pick. The Swedish bookstore? The cow? The underwater barfight? It all sounds like some bad movie. It's not. It's one of the funniest films ever. It's got some great songs as well! And not by Mel Tormé. I know a little German. He's sitting over there.
Posted by Jason at 1:59 PM