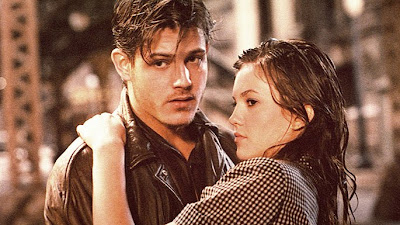 Time to look at some more 80s classics, okay? Or "classics", possibly. I suddenly felt a bit nostalgic. Hey, we're all human. Starting with Streets Of Fire. I really enjoyed this film when it came out in 84. Singer Diane Lane is kidnapped by bad guy Willem Dafoe. Her ex Michael Paré comes back to town to kick some ass. Also starring Rick Moranis, Amy Madigan and in a small part, Bill Paxton. Directed by Walter Hill.

The film was called a rock and roll fable and takes place in some alternative 50s universe, but is basically a western. (Westerns in disguise is actually a good theme for some later series of films. I could rewatch Outland, Mad Max 2, Matewan and Assault on Precinct 13. Hmm... okay, making a note of that.) The hero arrives on a subway instead of a horse, there's a bar fight instead of a saloon fight, and the duel at the end is with sledgehammers instead of guns. The dialogues are just a collection of clichés. Paré has the right look for the hero, but turns out to be nothing more than a second rate Stallone. Moranis and Dafoe are fun in their parts. Diane Lane is cute, but doesn't get to do much. The music is a mix of Meatloafish rockopera and rockabilly. Basically, it's a stylish but pretty empty film. I maybe wish they had played it more straight and dialled down the clichés a bit. Still fun to watch, though.
Posted by Jason at 6:56 AM