My Life As A Dog 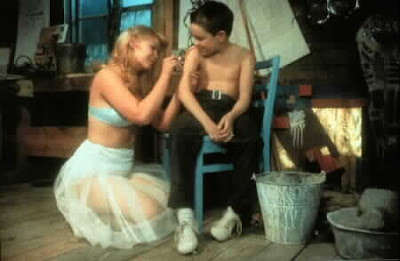 Sweden, the 1950s. A boy is sent to live with his uncle in the countryside while his mother is ill from tuberculosis. Directed by Lasse Hallström.

It's a good film, carried in a large part by the seamless performance of Anton Glanzelius as the boy. You never get the impression that he is acting. The film is based on a book that I can only imagine is more or less autobiographical. There are details, like the scenes of the boy reading from a lingerie catalog for an old, bedridden man, that can't really be made up. It has to be true. In fact, the film perfectly captures the mystery and the sadness of being a kid. You can think on some of the things you did back then, and it's like it's some totally different person. Which it is, of course.
Posted by Jason at 2:14 PM