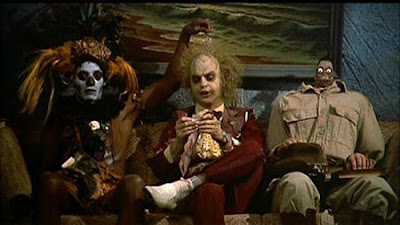 Boring couple Alec Baldwin and Geena Davis die in an accident. They find themselves back in their old house that is now taken over by yuppiecouple Jeffrey Jones and Catherine O'Hara and their daughter Winona Ryder. Baldwin and Davis hire "bio-exorcist" Betelgeuse, Michael Keaton, to chase them out. Directed by Tim Burton.

This is another case of a film that I used to like, but now discover to be slightly boring to rewatch. Again, I'm not sure if this is because I've seen it too many times or because I'm just getting too old to enjoy it. What really saves the film is Keaton, whose performance is a real tour de force. I wouldn't have minded a sequel to this film just to see more of him.

Burton is a pretty uneven director. I still think Ed Wood is his best film. Which he then followed up with Mars Attacks, probably his worst film. I'm not sure I agree with the opinion that he has sold out. I haven't seen Alice in Wonderland, but I thought Sweeney Todd was pretty good. As a whole, though, his recent films seem to have less heart than the early ones.
Posted by Jason at 2:18 AM