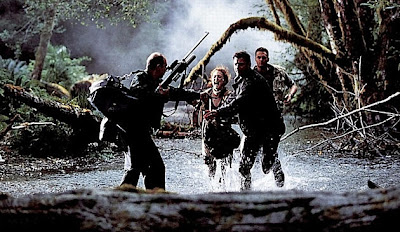 This film doesn't really have anything to do with anything. I just felt like watching some junk. Good junk, I should say. I've seen this film on lists of bad sequels, but in my mind this is one of those rare cases where the sequel is actually better than the original. Jurassic Park I thought was a pretty awful film, with unappealing characters. Especially those two kids. You really sat there hoping the dinosaurs would get them. There's a kid in this film also, but on an annoyance scale from 1 to 10 she's only maybe around 3. The other actors do their job well enough, especially Jeff Goldblum. There are some great set pieces in the film. You can sort of feel the presence of the writer, though, moving the characters around. The CGI looks pretty convincing. Spielberg cheats a bit, having most of the film take place at night. Logically the scenes in San Diego should have been in the day time. If I have a problem with the film it's that you never really get "lost" in it. There are constantly shots that are so spielbergian that you can't help but notice them, you keep being pulled out of the film. And Spielberg being Spielberg, he of course insists on telling you exactly what you should feel at all times, never really leaving that part to the viewer.
Posted by Jason at 10:56 AM