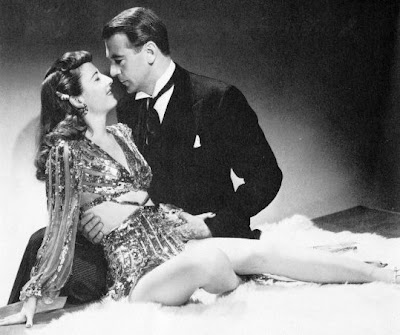 Gary Cooper is a professor working on an encyclopedia. He runs into nightclub singer Barbara Stanwyck while doing research on slang. There's also some gangsters involved, including Dana Andrews and Dan Duryea. There's also that guy from Casablanca and that guy from It's A Wonderful Life. Directed by Howard Hawks.

It's a funny film despite the silliness of the story, a sort of update of Snow White and the seven dwarves. Cooper is very good as a shy and stuffy professor and Stanwyck is, of course, perfect in her role. At almost two hours it's maybe a bit too long. The script is co-written by Billy Wilder, and it's interesting that it's a European, who hardly spoke any English when he arrived in the US, that is the one using American vernacular as basis for a comedy.
Posted by Jason at 10:20 AM