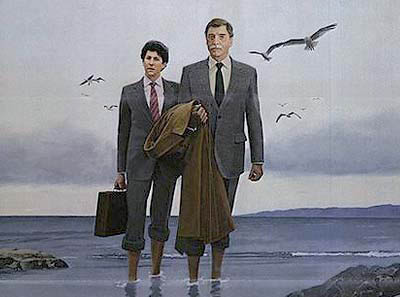 Head of an American oil company Burt Lancaster sends Peter Riegert to Scotland to buy a small village that will be turned into an oil refinery. Written and directed by Bill Forsyth.

Made 27 years ago, the film today is slightly dated. Riegert describes himself as a telex man, and he doesn't walk around talking on cell phones during the first half of the film. Forsyth took the conflicts of USA/Europe, Big city/Small community, Technology/Nature and turned it into a gentle comedy. Lancaster is terrific in his role - older, but probably still able to beat you in armwrestling or drink you under the table. Mark Knopfler's music is perfect, as well. If there is a wrong step, it's the crazy psychiatrist in the Houston part who seems to belong in an other film.
Posted by Jason at 2:22 AM