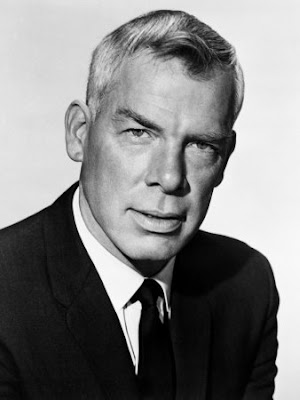 Moving on: Lee Marvin, starting with The Killers. Except the title and the opening of the resignated man not running from the men who have come to kill him, the film has absolutely nothing to do with Ernest Hemingway's short story. Lee Marvin and Clu Gulager are the killers, John Cassavetes the victim, Angie Dickinson (before she became a blonde) the femme fatale and as the bad guy... Ronald Reagan!

As with the original film - by Robert Siodmak, made in 46, starring Burt Lancaster and Ava Gardner - the story of why Cassavetes doesn't run is told in flashbacks. This version of the film feels more dated than the original, though. The back projections during the racing scenes don't help. The dialogues between Cassavetes and Dickinson are not even near anything real people would say. That's okay, but they don't reach that level of twisted poetry either that you find in the best of these films. Unfortunately, there was a problem with the disc and I was unable to watch the last five minutes of the film. Anyway, most of all it made me want to rewatch the original. And Angie, you should have stayed a brunette!
Posted by Jason at 1:59 AM