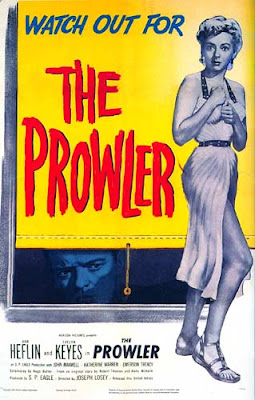 Cop Van Heflin falls for housewife Evelyn Keyes and decides to get rid of her husband. Directed by Joseph Losey.

Not lousy at all, ha ha. (Sorry!) Actually a great, little film noir, commenting on the post WW2 material wealth. Keyes has it, living in a big house, but is unhappy and doesn't want it. Heflin lives in a crummy apartment and desperately wants it, even going to the step of killing someone. And he's a cop! But compared to the couple in Double Indemnity, this couple is strangely sympathetic. Maybe it's the actors. Because of the Hays code, saying that crime must be punished, you know it's not going to end well, but the third act is still quite exciting and pretty dark. Keyes gets pregnant by Heflin before she marries him, I didn't know that was allowed on film at the time. Strangely, she has a baby, but we never see her in a pregnant state, so showing her stomach would not have been allowed by the Hays code?
Posted by Jason at 4:44 AM