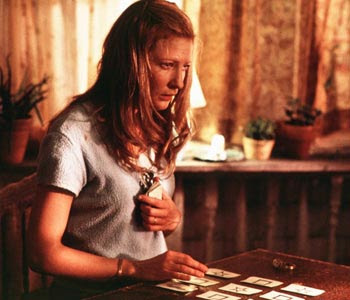 Cate Blanchett is a psychic. She is asked by the police to help find a missing woman. Also starring Keanu Reeves as the least convincing redneck ever - where's Sam Rockwell when you need him? - and Giovanni Ribisi. Co-written by Billy Bob Thornton and directed by Sam Raimi.

Another Southern Gothic by Thornton, but less successfull than Sling Blade. Raimi's earlier film A Simple Plan was also better. One problem is that the film falls between two chairs. It neither works as a horrorfilm or as an indiefilm type portrayal of life in the South. The psychic stuff is hard to believe, but you can sort of accept it. The ending however goes one step further, and instead of being profound it's just silly. Blanchett is good in her role, though, and the film was maybe necessary for Raimi on his way to do the Spider-Man movies.
Posted by Jason at 2:13 AM