Day of the Outlaw 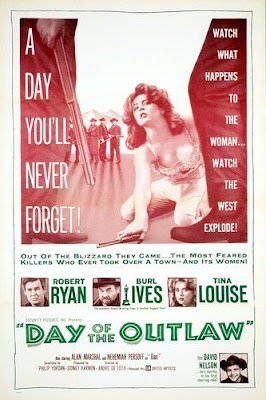 Robert Ryan is in conflict with an other rancher and in love with that man's wife, Tina Louise (well, who wouldn't be?). Things heat up even more when Burl Ives and his gang ride into town. Directed by André De Toth.

An austere, psychological western set in a snowy landscape, the film looks great in black and white. If Ingemar Bergman had ever done a western it would probably have looked something like this. De Toth avoids the usual clichés, there's no clear division between the white hats and the black hats, and good luck in guessing how it will end. Ryan is solid, as always, but the film really belongs to Ives.
Posted by Jason at 12:57 AM