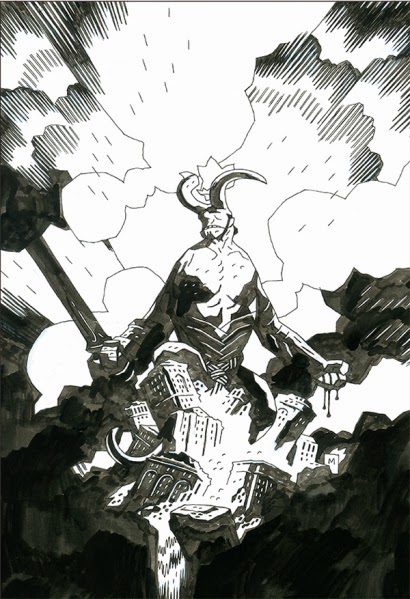 Anything Goes by Lucy Moore
A book about the roaring 20s, going through some of the best known people from that decade: Zelda and Scott Fitzgerald, Jack Dempsey, Charles Lindbergh, Al Capone and so on. Even the Ku Klux Klan. There's stuff I had come across before, like the Sacco and Vanzetti case, but here you get the background.

Cannon by Wallace Wood
The first 70 or 80 pages are fun, but at some point I stopped reading the text and just looked at the pictures. Well, it turns out you can actually get tired of looking at tits. In the second half of the book Wood just lost interest or had to work faster and the quality of the drawings goes down quite a bit. I assume there also were some assistants involved. I refuse to believe that it's Wood who drew page 178.

Hellboy: The First 20 Years by Mike Mignola
Damn, twenty years! I remember buying that issue of Next Men just because it had some Hellboy pages in it... While waiting for the Hellboy in Hell collection, this book is nice to look at in the meantime. Lots of covers from the last decade, the period where Mignola stopped drawing comics, sometimes in colours, sometimes in black and white, with blue pencil lines and white-out showing. And you can see the evolution, from the early, more Marvel-ish compositions to less noisy, more moody ones, with details left to a minimum.

Bark by Lorrie Moore
The master of the short story that is both sad and funny at the same time. Middle age, divorce, death, disease, war in Iraq, you name it, it's all here, without actually being depressing. Almost every page has some sentence that is pure gold. Favourite story: Debarking

A Christmas for Shacktown and Christmas on Bear Mountain by Carl Barks
I keep buying these books even though I find the stories can be uneven and Donald Duck not very interesting as a character. But it's hard not to enjoy Barks' masterful cartooning, just the delight of his lines on paper.

Essential Fantastic Four vol. 3
I realized I haven't really read any Jack Kirby - I think maybe an issue of Thor or something like that, so I figured I should do something about it, and this book is the peak of the Kirby / Lee stuff, no? I like the Jack Kirby drawings, especially when inked by Joe Sinnott, but I wish Stan Lee could have cut the text by... oh, say 50%.

The Moving Target by Ross MacDonald
What do you do when you've read all the Chandler and Hammet books? You move on to Ross MacDonald.
Posted by Jason at 1:00 AM