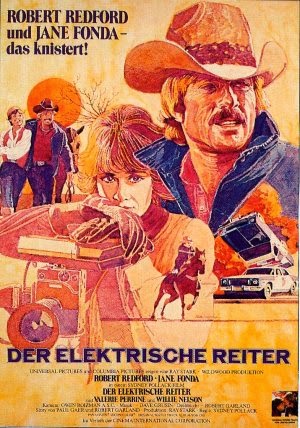 Robert Redford is the has-been rodeo star advertising breakfast cereal for a big corporation, who has the chance to redeem himself by stealing their drugged up horse and setting it free, Jane Fonda is the reporter trying to get the story. Directed by Sydney Pollack.

Not the best of the Redford / Pollack films. It's not even the best of the Redford / Fonda films - Barefoot in the Park, made 12 years earlier, wins in that department. Fonda is a bit annoying in her part as the pushy reporter, or rather the role is annoying. The first half of the film is best, then it gets a bit too mushy out in the prairie scenes. And as a whole it could have been more subtle. Corporate greed has sold out American values, yes, we get it, Sydney, we get it.
Posted by Jason at 1:47 AM