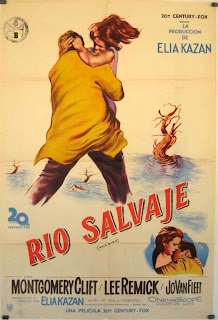 Montgomery Clift is sent to Tennessee to buy land from an old widow, to build a dam that will stop floods, and falls for her granddaughter, Lee Remick. Directed by Elia Kazan.

Okay, maybe not a masterpiece in the same league as On The Waterfront, but still, a pretty good film, about both the good and the bad side of progress. Clift and Remick are very good and there's also the classic, understated direction by Kazan - not a single shakycam in sight.

If Marlon Brando and Montgomery Clift were young today, what kind of movies would they do? Would they do superhero films? Would we see Brando as Wolverine or Clift as Batman? It's a bit depressing to think about.
Posted by Jason at 12:03 AM