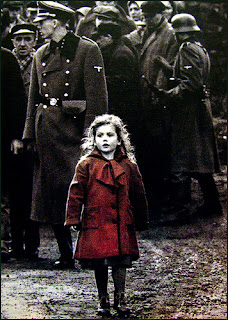 I'm reading Forgotten Voices of the Holocaust by Lyn Smith and Aamon Goeth's name is mentioned, so I thought I should re-watch Schindler's List, where Goeth is played by Ralph Fiennes. It's still an impressive film, but in my mind more uneven than Roman Polanski's The Pianist. In Spielberg's film there is a mix of documentary style images and more theatrical moments, like Goeth's monologue in front of the Jewish maid. The liquidation of the ghetto sequence is the real bravura part of the film. It belongs up there with the storming the beach sequence in Saving Private Ryan.

Of course, it's impossible now to watch Schindler's List without getting Louis CK and Seinfeld in your head. The Seinfeld parody is totally fair, I think. That scene in the film, where Schindler breaks down, is painfully phoney and sticks out like a sore thumb. Spielberg just couldn't help himself, I guess. But it could easily have been taken out, since the epilogue scene, where the real persons and the actors put a stone on Schindler's grave is a lot more powerful.
Posted by Jason at 12:03 AM