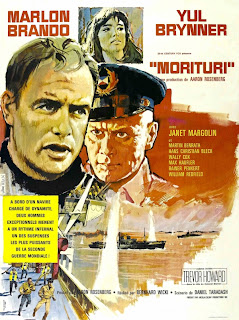 World War 2. Marlon Brando is a German blackmailed by the English to be a saboteur. Can a good actor save a bad film? No. It's another one of Brando's many flops from the 60s. He's doing the German accent thing again, like in The Young Lions. It's a talkative film, not very exciting. Yul Brynner looks pretty bored. There are some 'splotions and stuff at the end, but it's too little too late.

Much better! It takes some time to get used to Marlon Brando in brownface, to look more latin, but it's a good film, less dated than I feared, with Anthony Quinn as Brando's brother and a solid script by John Steinbeck.
Posted by Jason at 6:32 AM