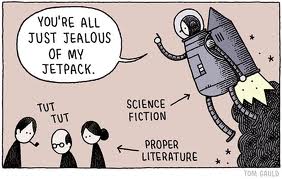 You're All Just Jealous of My Jetpack by Tom Gauld
Minimalistic and drily funny strips collected from The Guardian.

Sgt. Rock vol 3
Far too text heavy, often telling things you already see in the panels, just like in the EC comics - you end up just looking at the images by Joe Kubert (and sometimes Russ Heath), trying not to get ink in your eyes.

Billy Wilder in Hollywood by Maurice Zolotow
A great book about Wilder's life and career, not skipping the less successfull films of his later years.

Forgotten Voices of The Holocaust by Lyn Smith
Heartbreaking stories told by the survivors, and more powerful since you're getting the stories directly, in their own words, not retold by a writer.

Their Darkest Hour - People Tested to the Extreme in WWII by Laurence Rees
This on the other side has too short chapters, and it feels less powerful since you get the stories filtered through the writer.

After Daybreak - The Liberation of Belsen, 1945 by Ben Shephard
The story of the British troops and doctors trying to save the lives of the camp survivors, including mistakes that were done, causing more deaths.

Inside Scientology - The Story of America's Most Secretive Religion by Janet Reitman
It's an interesting book. So, apparently, Hubbard was a crook and the current leader, David Miscavige, is a sociopath. Most devastating are the chapters about the death of scientologist Lisa McPherson, that the church tried to cover up. Also, you'll never want to see another film with Tom Cruise.


Currently Reading:
Savage Continent - Europe in the Aftermath of World War II by Keith Lowe
We know what happened in WWII, but what happened after the end of the war, with people trying to survive in the ruins of Europe?

Waiting to be read:
Surviving The Sword - Prisoners of the Japanese 1942 - 45 by Brian MacArthur
The Last Escape  - The Untold Story of Allied Prisoners of War in Germany by John Nichol and Tony Rennell
Sometimes a Great Notion by Ken Kesey
Posted by Jason at 5:43 AM