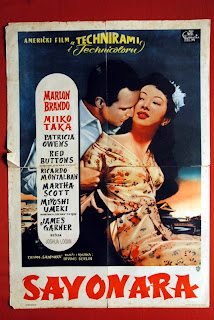 Marlon Brando falls in love with a Japanese woman.  It's one of those tragic love stories in an exotic location Hollywood did a lot of in the late fifties. It's slow, with stilted conversations and everybody is sleepwalking, including the camera. Brando is wasted - they should have asked Rock Hudson. Ricardo Montalban plays a Japanese man (and almost gets away with it) and apparently they also offered Audrey Hepburn the role as the Japanese love interest, but she wisely turned it down.

Michael Douglas has to capture some yakuza guy in Tokyo. I saw this in the cinema when it came out. A second viewing now didn't improve my opinion. It's an 80s film, so will Douglas have a mullet and will there be a shitty synth score? Yes. It's directed by Ridley Scott, so will there be neon, smoke and wet pavements? Yes. Is it a good film? 'S okay, but too long. It looks good, very Bladerunnerish, but with a weak, clichéd script, you can't help but notice Scott's usual bag of visual tricks.
Posted by Jason at 12:09 AM